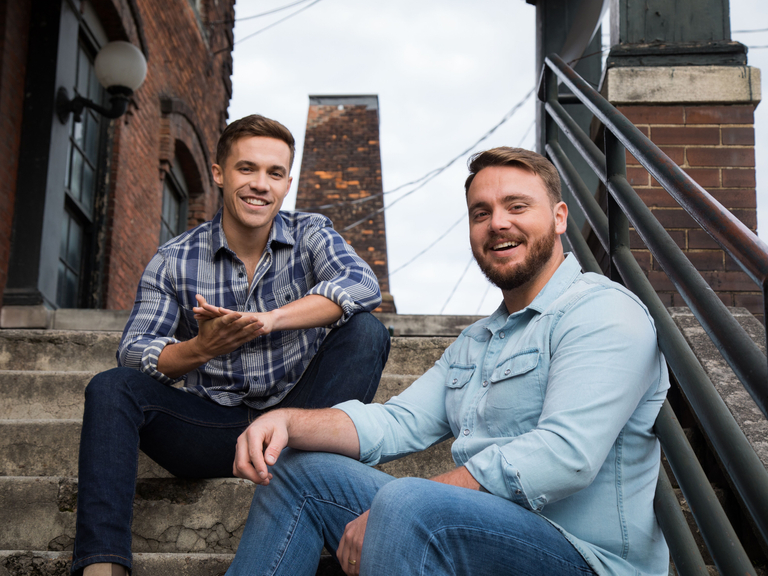 Muscadine Bloodline Me On You Tour at The District in Sioux Falls, SD on Thursday, February 2, 2023 at 8:00 PM.

Muscadine Bloodline’s Gary Stanton and Charlie Muncaster both grew up playing music in Mobile, Alabama, with mutual friends saying they should connect. But their first official meeting didn’t happen until about six years ago, when Muncaster’s college band was playing a show in Mobile and needed an opening act. Stanton got the call. “After the show, we kept in touch when I moved off to Hattiesburg for college,” Stanton explains. During his junior year at the University of Southern Mississippi, Stanton started his own band and the two began swapping opening slots and writing together. After graduation in 2015, Stanton headed to Nashville while Muncaster commuted from Alabama to play and write with him. “We started getting a real good chemistry and our harmonies sounded great with each other,” Stanton says. In October of that year, Muncaster made his move and, the very next week, the guys were in the studio cutting three songs. Muscadine Bloodline became a reality upon their release in December 2015, and “we haven’t looked back since,” Stanton adds. They have, however, spent most of their weekends on the road, gigging across the Southland because they believe in making their fans the old-fashioned way: by earning them, one at a time. “We really want to ‘grassroots’ Muscadine Bloodline,” Muncaster says. “It’s cool to watch it grow town by town — coming back to a town and more people are there. The industry is changing and there are a lot of artists who are killing it, while doing it their own way. They go out and tour really hard. And they do a lot of the brand-building out on the road, their own way. That is hard to do these days, but it truly is the definition of staying true to yourself and the music you put out.” With a soulfulness in their harmonies and a catchiness in their hooks, the music Muscadine Bloodline puts out echoes the combination of classic country and Southern rock they both grew up listening to, from the Eagles and Lynyrd Skynyrd to Eric Church and Blackberry Smoke. Unlike many artists in contemporary country, MB leans away from frivolity and into earnestness, a reflection of their own lives and loves. Thinking about country music, Stanton notes, “I fell in love with the stories, not the sound. As a writer, it is cool to put myself in a situation, whether it directly applies to me or not. That’s why I love country music and that’s why we love writing about real topics, instead of party anthems.” Stanton and Muncaster find those real topics all around them, from new highways to old memories, like the inspiration for “CB Radio” which came to Stanton on a late-night drive. “I was driving from Mississippi alone to Nashville, and I passed a sign that read ‘Tupelo: 50 miles.’ It was real late, and I love driving through the night because, when you can’t see anything except the lines on the road and other headlights, all you have is thoughts.” With the heartfelt “Crickets and Cane Poles,” MB puts a painful spin on a fond remembrance to craft a story that is hard not to relate to: a hopeful, bright-eyed kid trying to bond with an all-too-aloof father. “Every time we play that song, you can hear a pin drop,” Stanton says. “I had a great dad that I would go bream fishing with crickets and cane poles. That kind of fishing is not about technique; it’s about spending time with someone. We tell the story, and sometimes I put myself in the song, and it gets to me, just as much as the listener.” All things being equal, though, the Muscadine Bloodline boys do know how to have a good time — they just do it with a bit more depth, as evidenced in “Depending on the Night.” The last song written for their EP, the cut started with the title. When they sat down to write with James McNair, they bounced around the idea of having a girl that’s more of a wild card than a wild child… although that’s in there, too: “[It’s about] someone that you never know what’s coming, but you love her for it,” Muncaster offers. “The song tells a story of how you never know if your girl will want to stay in and be in bed by 9 or be out partying all night. But that mystery and spontaneity is the awesome part.” For Muscadine Bloodline, the mystery, spontaneity, and awesome parts are only just beginning. How do they hope it all unfolds on the road ahead? “We’d be lying if we said we wouldn’t want to be the most successful duo there ever was, but we just really want to play good, honest music that moves hearts and not hips,” Stanton says. “But sometimes they can go hand-in-hand.”